Turkey's economic performance was discussed in “The States of Economy” 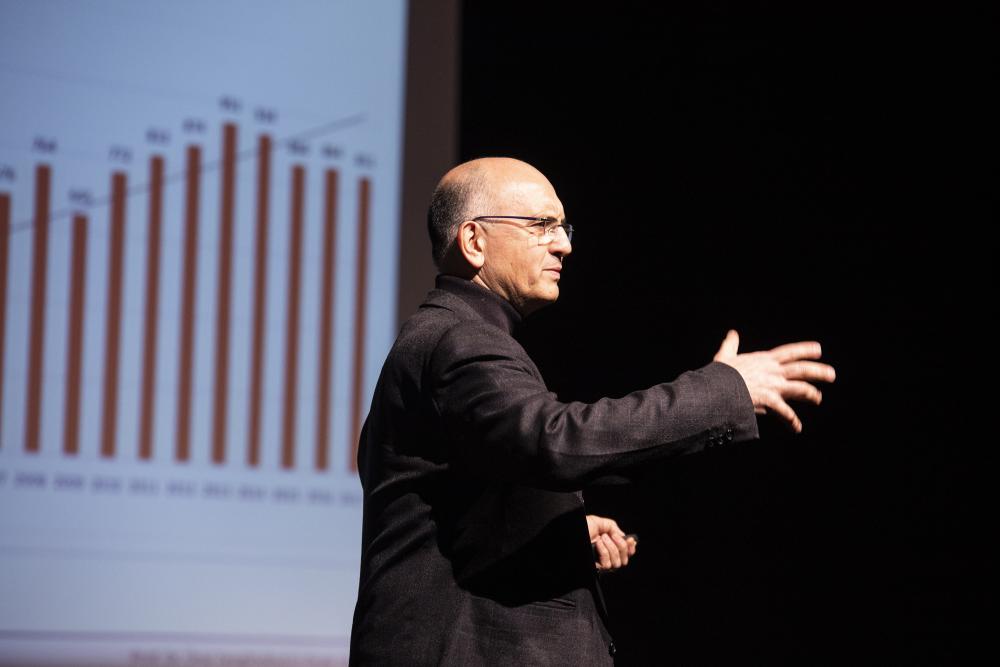 Turkey's economic performance was discussed in “The States of Economy”

Open Course with Alumni: The States of Economy speech series, which was organized within the scope of BU+ Events, aims to share the current research topics with Boğaziçi University graduates and to strengthen the relationship between graduates and campus. The 1st of “The States of Economy” speech series allow for listening to academic lectures on a wide range of topics, ranging from economic history to behavioral economics, from green economy to alternative economies. In his speech, "Independent Regulatory Institutions and Economic Performance in Turkey", Professor of Economics at Boğaziçi University, Prof. Dr. Ünal Zenginobuz, addressed the link between regulatory institutions and economic growth.

In the opening speech of the event, Professor at the Department of Sociology at Boğaziçi University, Prof. Dr. Zafer Yenal stated that they organize the Open Course with Alumni speech series in collaboration with Culture and Arts Commission and Alumni Office of Boğaziçi University in order to bring the graduates back to campus and tighten relations with them. Yenal introduced Ünal Zenginobuz saying “Prof. Dr. Ünal Zenginobuz has been working as an academician at Boğaziçi University since 1996 and has been serving as the Director of the Institute of Social Sciences for 5 years.”

Indicating that, when GDP is taken into account, Turkey is a growing country, Zenginobuz shared that despite this growth Turkey is caught in the middle-income trap: “Middle-income trap means staying stuck after reaching a certain income level. We are growing but there is a great difference between us and the major economies of the world.”. Discussing the relationship between unemployment rate, inflation rate, human development index and economic performance, Prof. Dr. Ünal Zenginobuz emphasized that fluctuations of Turkey's growth rate is in connection with investments.

“Additional growth is only possible with investments.”

Indicating that investment means savings and Turkey’s savings deficit makes the investments dependent on foreign resources, Zenginobuz added: "Turkey's economy grows if there is money, does not grow if we can’t find money. The qualifications of external resources are also very important. Short-term capital movement does not have much effect because it needs to be renewed continuously. Foreign direct investments are necessary.”. Pointing out that foreign direct investments are limited, Zenginobuz stated that the quality of the investment environment is decisive in this regard.

Professor Dr. Ünal Zenginobuz shared the historical change in role of the state in Turkey's economy. He mentioned the adoption of regulatory government understanding in the market economy during 1990s, and also stated that independent regulatory agencies are created in the context of this goal: “Institutions such as; Competition Authority, Telecommunications Authority, Energy Market Regulation Authority, Banking Regulation and Supervisory Authority were set up to provide solutions to the problems caused by investment uncertainty, through establishing predictable rules. However, as the state tradition was more suitable for traditional bureaucracy, they gradually lost their autonomy.”.

Zenginobuz expressed that nowadays; independence rate of the independent regulatory institutions is around 0.50, on paper. In practice, this rate may be even lower, he added. Prof. Dr. Ünal Zenginobuz carried out his speech saying: “As a result, we can ask why these institutions are formed. In the creation of institutions, our own initiative is limited. Independent regulatory institutions have been created as a result of the process of adapting to international organizations such as the European Union and the World Bank.”. He then answered the questions of the audience.

Who is Prof. Dr. Ünal Zenginobuz?