How can we overcome vicious cycles in agriculture? 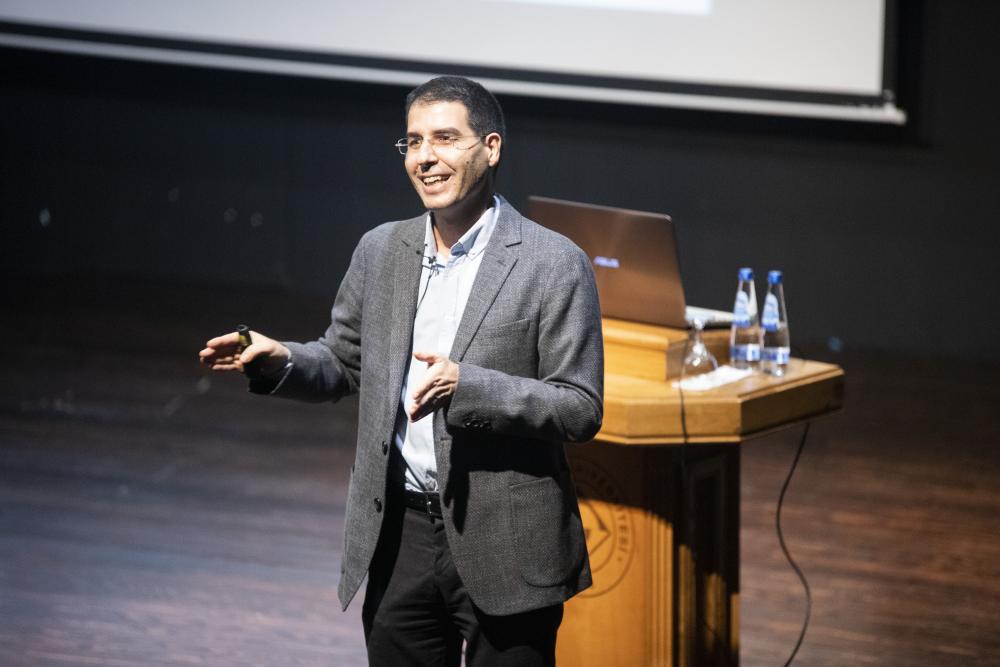 How can we overcome vicious cycles in agriculture?

Within the scope of BU+ Events, Open Course with Alumni: The States of Economy speech series was held on Thursday, February 21st, 2019, to discuss Turkey’s agricultural policy. Professor of Economics at Boğaziçi University, Prof. Dr. Gökhan Özertan’s presentation focusing on problems of Turkey's agricultural policy, the changes occurring in the world in agricultural sector and possible solutions for an efficient agricultural policy, met with great interest of graduates and academics.

Open Course with Alumni: The States of Economy speech series that was organized in order to evaluate current developments in the economy and bring the graduates together in the evening lectures, with support of Boğaziçi University Alumni Office. 4th of the speech series, "Turkey's Agricultural Policies: Why Can’t We Overcome the Vicious Cycle?” was held at Demir Demirgil Hall, in February 21st.  Head of the Department of Economics at Boğaziçi University, Prof. Dr. Gökhan Özertan explained structural problems and possible solutions of the agricultural policies in Turkey.

“Problems in agricultural and food sectors affect other sectors as well.”

Prof. Dr. Gökhan Özertan listed the other problems specific to the agricultural sector in Turkey as follows: "Because of economic and social reasons, it is difficult to keep people in the village now. Besides, with ecological problems, sustainability in agriculture has become an important problem. A forecasted 2-3% increase in temperatures will result in a reduction of up to 20% in harvest." Adding that the agricultural sector in Turkey has failed in complying with technology, Özertan shared that only 2% of modern greenhouses use technology.

"R & D investment of Turkey is the lowest among OECD countries”

Özertan, shared the 1981 report of TÜSİAD about the problems that need to be improved in agriculture and stated that the targets mentioned in the report, such as increasing the productivity, preventing the migration from rural to urban areas, distributing the land more equitably and providing equal opportunity to the farmers are still valid despite the years passed. Adding: "For a long time, the problem is determined successfully by the public side, but we couldn’t proceed toward a solution.", Özertan stated the need to assess the debate around a holistic solution, that is not only limited to Turkey but also considering global impacts. "The discussions usually consists only of Turkey, but we also need to look at what is going on in the world. For example, Netherlands has achieved productivity in agriculture by applying a model based on the private sector, public and R&D triangle. Turkey is the lowest among OECD countries, in terms of R&D investment.”.

Underlining that the agricultural sector in the world is changing, Prof. Dr. Gökhan Özertan stated that the value chain, which is accepted as “from field to table”, is no longer finished at the “table”, and that waste management and green growth are included in the value chain following the “table”; “There is a shift from producer-oriented approach to a consumer-oriented approach around the world, and it is now possible to order agricultural products even from the Internet. ”.

Are cooperatives the solution?

Özertan added that, in Turkey, failure of cooperatives depends mostly on the institutional problems such as opportunistic approaches, lack of confidence, lack of incentive mechanisms and issues in applying the rules besides country specific problems. He also stated: "Cooperatives in certain regions are dominated by certain families and such practices block cooperation of farmers.”.