On Green Economy and Environmental Justice 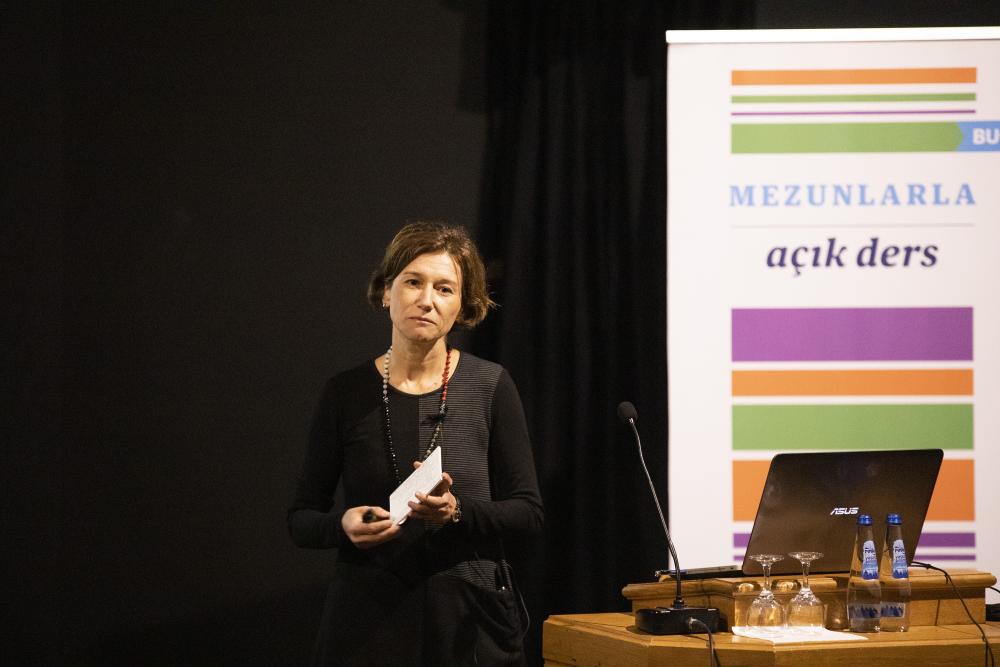 On Green Economy and Environmental Justice

Within the scope of BU+ Events, Open Course with Alumni: The States of Economy speech series was held on Thursday, March 21st, 2019, to discuss the green economy. Professor of Economics at Boğaziçi University, Prof. Dr. Begüm Özkaynak made her presentation titled "Where are We in Green Economy?” which is about the state where sustainable development evolved in its historical progress, in the world and in Turkey. After the presentation, future of green economy was discussed.

In the Open Course with Alumni: The States of Economy speeches, which is organized in order to bring the graduates back to the campus, Professor of the Department of Economics at Boğaziçi University, Prof. Dr. Begüm Özkaynak shared her presentation “Where Are We in Green Economy?” with the alumni. Özkaynak who graduated from Boğaziçi University, Department of Economics in 1997, got her Ph.D. in ecological economics in 2005 at the Autonomous University of Barcelona. She has been teaching at Boğaziçi University since 2005. Prof. Dr. Begüm Özkaynak's research interests include sustainable development, ecological economy, urban sustainability, environmental policy and governance and political ecology.

In the recent days when the impacts of climate change are increasingly felt and environmental justice rhetoric rises, it becomes more important to establish an economic model based on sustainable development. Beginning the presentation with the historical development of green economy and environmental justice concepts, Özkaynak stated that, when the environmental effects of growth started to be seen in the early 1970s, it was emphasized that the limits of the planet would be exceeded in the future and the possibility of zero growth was indicated for the first time in the United Nations Conference on Human Environment in 1972. Özkaynak stated that in spite of this message, growth continued to be seen as a solution to environmental problems in the 1980s, and just after the 2000s, environmental sustainability could be removed from a human-oriented framework and started to be considered as a separate topic.

Can ecological modernization be carried out?

Prof. Dr. Begüm Özkaynak stressed that there are two challenging tasks to face when discussing the situation of green economy; “It is necessary to move the poor countries to a certain level of development and to remain within the limits of the ecological footprint. The main argument is whether ecological modernization is possible through these two tasks.”. Stating that the continued human development and growth of gross domestic product can be achieved by using less resources, Prof. Dr. Özkaynak remarked that although empirical data show that resource efficiency increases by technological improvements, overall resource utilization does not decrease. She also stressed that, although there are new sustainable energy resources, existing resources with low sustainability are still used.

Mentioning social justice as one of the most important problems facing the green economy today, Özkaynak emphasized the need to pay attention to the concept of ecological debt when discussing inequalities in environmental destruction. The concept of ecological debt, which can be expressed as the unfair distribution of carbon emissions by industrialized countries’ production practices, using resources in under-developed countries, is becoming a debate that should be emphasized more with the discourse of Southern countries, Özkaynak states.

In her presentation, touching on the debate about the place of Turkey in the green economy, Prof. Dr. Begüm Özkaynak showed that greenhouse gas emissions have increased rapidly in Turkey and this increase is caused mainly by the energy sector. Özkaynak also shared that Turkey is below the average of OECD countries in terms of energy efficiency and investing in coal, as an energy source is an important problem. She completed her speech stating; “One of the most important problems is to shift new energy investments to renewable energy. ”.