"To be fair is not in human nature" 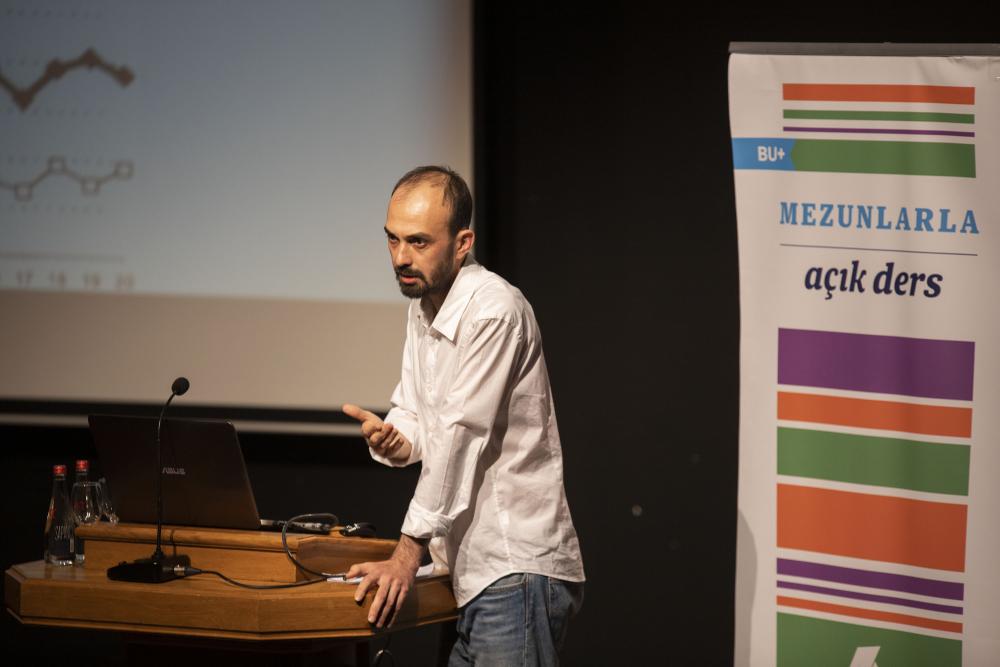 "To be fair is not in human nature"

Open Courses, which are organized by Boğaziçi University, for everyone who are concerned with scientific and social topics had a part for Boğaziçi University graduates; “Open Course with Alumni: The States of Economy” speech series focused on a wıde range topics, from economic history to behavioral economics, from sustainable development to alternative economies. The last lecture of the speech series was held on April 18 at Demir Demirgil Hall. In the lecture titled “What We Learned from Economic Experiments”, Professor of Economics at Boğaziçi University, Assoc. Prof. Mehmet Yiğit Gürdal presented the results of the experiments on behavioral economics, carried out in the economics laboratory, to the participants.

In the opening speech of the lecture, Professor of Sociology at Boğaziçi University, Advisor to the Rector, Prof. Dr. Zafer Yenal thanked Culture and Art Commission and the Alumni Office for organizing “The States of Economy” series. Underlining that the Culture and Arts Commission organizes activities in many fields such as music, performance and Open Courses under the title of BU+, Yenal said that the lecture series have been focused on for the last few years and that the scientific studies at Boğaziçi University are conveyed to public.

In this context, reminding that Open Courses are turned into a special program for inviting the graduates in campus life, Prof. Dr. Zafer Yenal introduced Assoc. Prof. Mehmet Yiğit Gürdal, Professor at Boğaziçi University Department of Economics, as the lecturer of the last of The States of Economy series, which started 6 months ago. Yenal added that the topic of the speech is about “behavioral economics”, which is a field that is innovative and slightly out of traditional research methods and questions of economics science.

Mehmet Yiğit Gürdal, who started his speech by explaining the theory of rational choices, said that this theory provides important clues about the meaning of people's behaviors and continued: “Economics is based on rational choices. According to this theory, decision-makers make decisions with all the knowledge of the environment and with an unlimited ability to estimate and analyze. The decision-makers pick the choice that offers the highest benefit among the possible options. The benefits may vary from person to person, but the decision is related to how much the person avoids the risk and how much he discounts the future. ”

First of all, Gürdal mentioned that there is a framework effect on risk choices. Gürdal said; if the complex risk options offered to people were specified with a certain framework in the form of loss/gain, interesting results were achieved and continued his speech with the following words: “When options with no definite gains are presented with relatively large risk of losses, people can take more risks. We take less risk of losses in case of modest gains and tend to accept the gain immediately. It is important to know this framework because the possibility of loss can change people's preferences. For example, there are experiments where we can observe that many people prefer to take 1 lira with certainty, rather than a better gain lottery with a small possibility of losing everything.”

“Strategic thinking does not go on forever”

Afterwards, Gürdal talked about the experiments on how strategic thinking was shaped and explained the prediction game they performed: “In this game, participants choose a number between 0-100. We collect these numbers from everyone and estimate the average. We find 2/3 of the average and those who have chosen the nearest number win the game. Here, there are some possibilities that participants think before making an election: For example, some can predict that if random selection is made, the average of the numbers chosen by other participants will be about 50 and 2/3 of this will be 33. Some think that others may have chosen 33, which takes the prediction a little further, choosing 2/3 of that, 22.” Pointing out that a chart is constructed after this game is played with dozens of people, and it is determined that the 33 and 20 parts of the chart got a high rate of attention, Mehmet Yiğit Gürdal indicated that people generally concentrate on the 2nd and 3rd prediction options and do not continue to predict further.

Gürdal explained an experiment, which was performed first in Israel, on how people respond to incentives: “The participants were asked to perform an IQ test in various situations. In the first case, no payment was made to the participants for the test. In the second case, the participants were paid a small amount for the test, and then the increase continued. The situation where no payment was provided resulted in more effort than the less paid situation. Effort has remained fairly constant as the payment increased. Here we actually reach interesting points about rethinking financial incentives. ”

“Punishment is the price of our actions”

In his speech, Mehmet Yiğit Gürdal, who also touched on the subject of penalties and sanctions as negative incentives, said that people perceive the penalties as price. Mentioning another experiment, where parents who went to get their children late were sentenced to punishments, he pointed out that the level of getting late was higher when a relatively low penalty was imposed. Gürdal stated that the penalty was abolished in the following weeks but the high frequency of getting late did not decrease and commented as follows: “We see punishment as a price of our behavior, and if the price is low, we don't mind continuing the behavior.” Adding that, if the behavior is not priced, hypothetical values ​​are imposed on it, Gürdal statated that penalties actually save us from these value assignments and attribute a quantitative value to our behavior, thus making the behavior more negative.

As for “Fair Opinion Experiments”, Gürdal reported the results of an experiment called “Ultimatum” as following: “This game, played with partners, is based on suggesting some money to the other party. If the opposing party does not accept the proposed amount, each side gets zero, ie. both sides lose. We see that to suggest sharing the money 50-50 is accepted almost all the time. When we reach 70-30, this rate decreased to 80%. The acceptance rate of 90-10 is almost close to 0. In other words, it is not acceptable for the other party to win 90, even at the expense of losing. However, when in different parts of the world, especially in small tribes, these rates change. This proves that fairness is not in human nature.”

Reminding the researches that contain arguments that justice may have emerged through market integration, Gürdal added that the element of fairness may emerge due to the fact that people are prone to establish relations that are continuous and beneficial to both sides, during the day and year.

“The gain you can get is not the determinant of the lie.”

Mehmet Yiğit Gürdal, relayed an experiment explaining people's lying behavior as follows: “In another experiment, we ask the participants to go in a room that no one will see and throw the dice in the room and write the number on a paper. We pay the participant according to the number on the paper. The maximum reward here is 6, but we have an interesting point: lying has not increased dramatically when the gain from lying increased. So the profit you can get from lying is not the determinant of the lie. This is a bit about social image as well. If the information you give makes you seem to be lying, we avoid it. In fact, even if they get a 6, some people didn't want to report 6 to avoid being seen as a liar.”

Finally, Mehmet Yiğit Gürdal presented information about “nudge” applications, which became increasingly popular and derived from the behavioral economy, and about Richard Thaler, one of the pioneers of this approach. Gürdal stated that the nudge approach is about leaving individuals as free as possible, shaping their choices and ensuring that these choices benefit the society. He added: “For example, we see that organ donation rates are already high in countries where organs should be donated. Private pension system can also be thought the same way. You invest a certain amount of your salary in the pension fund. People think it's a good practice because it helps them accumulate more in time.”